[vc_row][vc_column css=”.vc_custom_1461585051858{background-color: #ffffff !important;}”][vc_column_text]The founder of Eleven Gauge Recordings, Thejus Nair is an Audio Academy alumni who does recordings, mixing and mastering for music bands in his recording studio. His deep love for music took him through an unconventional path and despite it all, he has made a mark for himself in the audio industry. Here’s his story:[/vc_column_text][vc_row_inner][vc_column_inner][vc_column_text]I did my schooling in Bahrain and Muscat and music has been a passion for me since then. I told my parents that I wanted to pursue music after my 12th grade but they told me that I had to finish my degree before I did anything else. So, I chose engineering and went on to do a Bachelor’s degree in biotechnology. I then went back to my parents to reiterate my interest in audio.[/vc_column_text][/vc_column_inner][/vc_row_inner][vc_column_text] 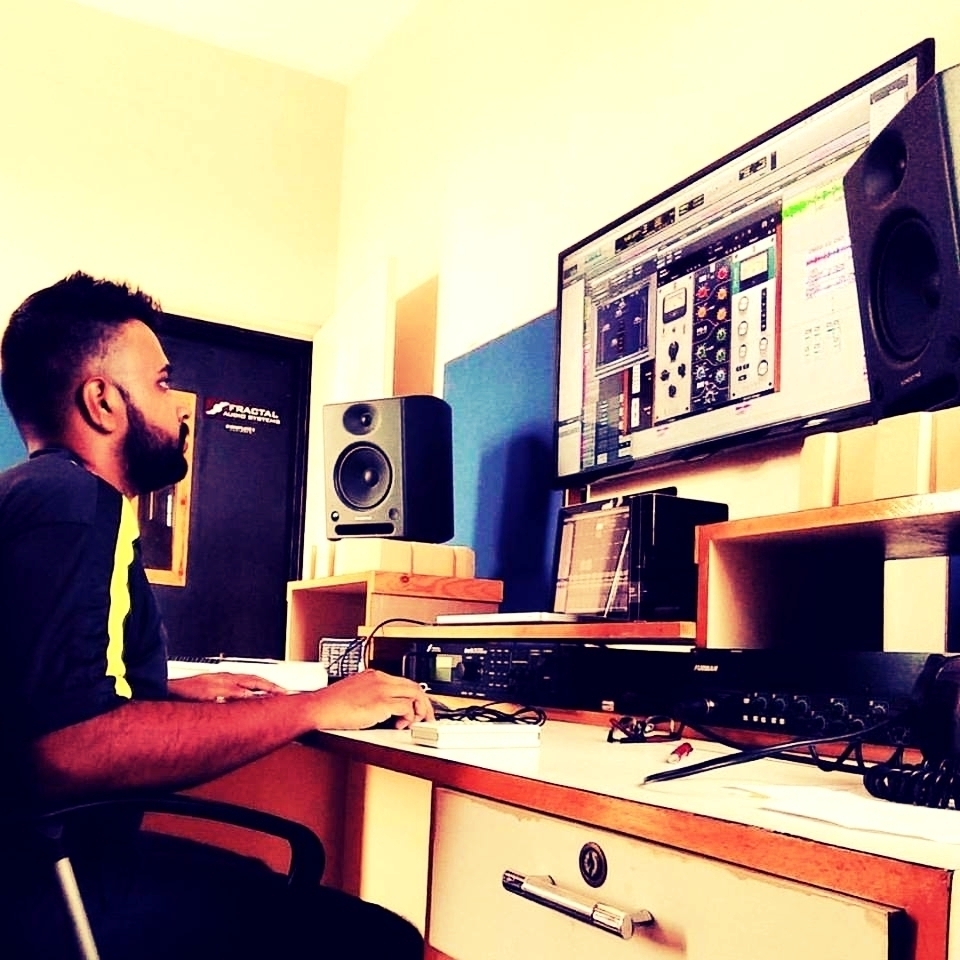 Once I was done with my degree, I began researching audio schools where I could learn the nuances of sound and acquire skills that would give me a solid foundation in the field. I chose Audio Academy since it offered students training in both live sound and studio sound and that would give me the foundation that I sought in both aspects of sound. I completed a certification in studio sound with Pro Tools. Just a month after I finished the course at Audio Academy, I began constructing a studio in my home and turned one of the rooms in my house into a recording space. It was after this recording studio began business that I told Niranjan that I am interested in interning at a big sound studio. My motivation was to understand where I stood among my peers in terms of my skills. I had been running my own studio successfully for two years but I felt the need to test myself in bigger waters.[/vc_column_text][vc_column_text]Vauhini set up the internship at Yash-Raj studios through Sreejesh Nair and Shantanu Hudlikar, the chief engineer at Yash-Raj and once I had sent in my statement of purpose and the dates were confirmed, I headed there. It was a big opportunity for me to test myself. I wanted to see how I would handle the work that a studio such as Yash-Raj did with big musicians and large set-ups. It was a great experience because I got to learn many new techniques that could only be learned in a big studio. I am someone who makes it a point to keep myself updated and learn new techniques and yet Yash-Raj taught me things I couldn’t have learned elsewhere.[/vc_column_text][vc_row_inner][vc_column_inner width=”1/2″][vc_column_text]I worked at the studio during one of the recordings for Rock On 2 and recordings for many other artists. It was an experience that really validated my training at Audio Academy and my own skills because I did not feel I lacked knowledge in any apsect and the studio professionals were also very happy with my work.[/vc_column_text][/vc_column_inner][vc_column_inner width=”1/2″][vc_single_image image=”1586″ img_size=”full” add_caption=”yes”][/vc_column_inner][/vc_row_inner][vc_column_text]I am now back in Bangalore and recording, mixing and mastering for various bands for their albums and singles. I also do dubbing for a few voice artistes and occasionally take on projects as a live sound engineer for corporates and audio shows. I’ve always been fascinated by sound and music and now this is what I do every day.[/vc_column_text][/vc_column][/vc_row]