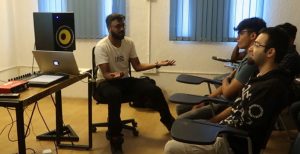 Ableton certified trainer Dawn Philip begins the workshop with a discourse on what constitutes electronic music. He insists that electronic devices such as synthesizers and samplers are simply instruments just like any other acoustic instrument one might be familiar with. The umbrella term ‘dance music’ does not do justice to the creative scope of electronic music. On this note, he explains the concept of recording real-world sounds and digitally repurposing them in a musical context. The thought process behind such creative nuance in sampled music comes from the mindset of an electronic artist who sought to explore sound in unconventional ways. This kind of thinking allows for new and interesting timbres for the familiar musical sounds that we were accustomed to listening. In this intersection between the acoustic and the electronic worlds of music exists the subtle art of sampling.

Dawn quickly loads up a session on Ableton Live. He creates an audio track to record samples and another one with the aptly named simpler to transform the samples. He addresses the attendees urging them to go on a scavenger hunt to find interesting source material to design an electronic drum kit. 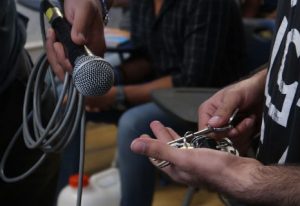 The students listen intently as he takes them through the scope of designing unique sounds with the different source material. Combing acoustically captured sounds and treating them electronically is breath of fresh air to an uninspired producer. He explains that the idea of distorting an otherwise ordinary sound into something unique appeals to many a music producer as it allows them to develop a so-called signature sound to their music. Dawn ends the session by emphasizing that this is just the tip of the iceberg when it comes to sampling and encourages the students to begin their exciting exploration of the sounds around them.