Learn how to set-up a Live Concert like a Pro

With big names such as Chris Martin, Justin Bieber and Ed Sheeran making their way to India, the pomp and show associated with live concerts is fresh in the minds of many people. One of the most important roles among the crew to ensure that a concert goes on smoothly is that of the rigger. Live rigging for concerts and live shows takes various elements, both strategic and technological, into consideration.

A rigger for live shows safely establishes power supplies for sound equipment, sets up basic backline, as well as monitoring and sound systems and knows how to operate them. Since the responsibilities that come with the role include handling equipment worth a small fortune, the rigger also is well versed with safety procedures for handling, rigging and staging and is able to function in a team alongside musicians and other performers. As someone who is familiar with the management and organisational roles involved with concert production, the rigger is extremely mindful of safe practices and essential health and safety for a smooth concert.

Safe Working Loads
There are specific terms that are associated with rigging and these acronyms are a common sight on stands as well as rigging equipment. Common among them— WLL (Working Load Limit), SWL (Safe Working Load), or MRL (Maximum Rated Load)— indicate the same thing, namely, the maximum amount of static weight that the item will safely hold continuously, when it is used correctly as intended. A good rigger will know that a static load implies that the load such as a loudspeaker does not move at all, even because of the wind or while lowering or raising it. Safe working load limits should never be exceeded.

Safety Factors
Safety Factor, refers to the margin of safety added to an item that takes into account loadings over and above the weight being hoisted and for reductions in capacity due to the extra loads imposed by acceleration and inertia- namely, any kind of movement.

System Design
The parameters for system design and its use for concerts depends on the nature of the performance, the size, shape and nature of the performance venue, the expected audience and the required level of sound. System design plays a large part in the rating of individual components. Similar to a chain a chain, a rigging system is only as strong as its weakest link. It is all of these factors in combination that need to be taken into account by a qualified person to design the rigging system. 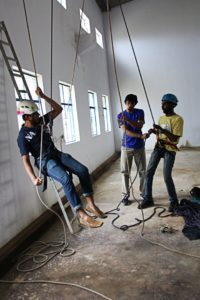 Since the topic of rigging is a vast one, here is a snapshot of the process in which some of the ways in which loudspeakers can be deployed and positioned is described.

Placement of the system 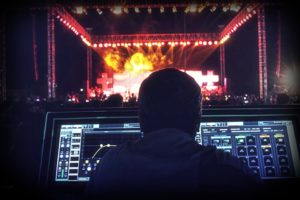 After that, the rigging is mostly done. Audio Academy, has in its curriculum a module devoted to rigging, to ensure that their students are well versed with its basic principles and are good to rig a system when they graduate.

In conclusion, a competent rigger should inspect all rigging equipment and hardware before use and regularly inspect the equipment for signs of wear, abuse and general adequacy, as well as perform any manufacturer recommended preventive maintenance.

Do not ever cut corners when it comes to rigging. Manufacturers generally have cabinets designed by them which can be used while flying with the equipment, and remember to use only hardware approved for that specific model. Follow all manufacturer recommendations concerning their individual products and don’t ever modify any rigging hardware as it may affect the weight loading capacity of the item.

On a final note, factor in enough time to do rigging correctly and make sure the crew isn’t tired because it is rushing and fatigue that most often cause accidents. Double check everything before it goes up in the air.