David Dearden is best known as the designer of Audient’s analog recording console ASP8024, an analog recording classic. Incredibly knowledgeable, affable, and humble, his career path was connected early on with consoles. That idea gave birth to our flagship console the ASP8024, a large format, inline analog console renowned for its simplicity and sound. Over twenty years later, the original design is still being sold in an upgraded form known as the Heritage Edition, a testament to the timeless quality of the original design. Audient has since continued to follow that same innovative philosophy and redefine it in other products such as our award-winning interface range and rack mount mic pres and a large part of the credit goes to David Dearden and his mad skills. 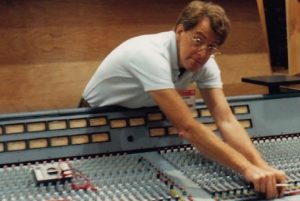 Young David Dearden with the Console

Being a high-school drop-out, David’s first job was at a Johannesburg studio belonging to David Manley (the original founder of Manley Laboratories) in 1968 where he experienced music, commercial, drama, and film recording as well as disc cutting. He was tasked with helping build a new valve console using mainly Telefunken V72 modules. In 1970, 20-year-old Dearden moved to the UK and secured a position as a junior maintenance engineer at Advision Studios where he was involved in converting the studio’s in-house built 8-track console into a 16 track system. In 1973-74, he led the design and construction by Quad Eight of two new consoles for Advision, one of which was the first automated console in the country. Despite expecting his time in the UK to be a short stint, he stayed on for five years by which time he had worked with Eddie Offord and Gus Dudgeon. He had also worked full time with studio designer Eddie Veale building custom consoles and studios, including private studios for John Lennon (for his Imagine sessions), Ringo Starr, George Harrison, and Chris Squire of Yes.

In 1980 he joined forces with Gareth Davies (ex-Soundcraft) to form DDA and over the next 15 years, David was responsible for the design mixing consoles in the 1980s and 90s, starting with the DD1000 and DD500 electronic crossovers. The first mixer was a custom 10:2 portable design for Tony Faulkner, which was later expanded and became the basis for the 4 bus M Series and S Series, and the 8 bus D Series mixers. The real break came with the introduction in 1985 of the AMR24 24-bus split desk, which broke new ground and set a new price/performance marker. More desks followed including the automated and centrally assignable in-line DCM232 and the all-input Profile and DMR12 plus a variety of live sound mixers. Once DDA became part of the Klark Teknik Group, he also designed the Midas XL200 and did the initial concept and design of the Midas H1000. After the sale of DDA and the emergence of digital consoles Dearden and Davies decided to set up the company Audient in 1997 with the aim of designing a great sounding, affordable, and efficient analog console. It was what they loved most- market research and detailed designing of mixing consoles.

What was considered a crazy idea then is what gave birth to the now-iconic console, the ASP8024, a large format, inline analog console renowned for its simplicity and sound. Introduced in 1998, it was unashamedly analog and described by Dearden as “…a very flexible, good sounding, simple to operate console”. Early customer feedback confirmed to Dearden and Davies that ASP8024 was something special with customers saying how easy it was to use, and how they never had to look at the manuals. In particular, educational facilities across the board praised the console’s versatility and easy intuitive signal path. Undoubtedly, ASP8024 is a straightforward, inline design with no digital paraphernalia, thus ensuring a future-proof design that is still manufactured today. The only changes to the original design have been just a few additional frame sizes, optional patch bay, and the DAW interface options.

Audient products are known for being high quality, cost-effective solutions. The product line includes recording and live sound mixing consoles (ASP8024 and Aztec), 8-channel microphone amplifiers (ASP008), an analog summing unit (Sumo), and 5.1 monitoring solutions (ASP510). They are known for their excellent performance, ergonomic simplicity, a shallow learning curve, and rugged, real-world interfaces. While many manufacturers have dropped out of the analog recording desk sector, Audient fulfills the need for analog interfaces to wrap around a digital core. 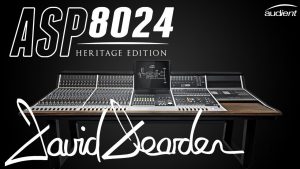 The processing stronghold of analog is obviously the sonic ‘flavor’ introduced by different consoles, compressors, and EQs. Plug-ins rarely, if ever, manage to reproduce the nuances of character that a vintage analog compressor can achieve. Moreover, with an analog console, everything is clearly laid out and has one button per function. This enables a ‘graphic’ view of the status of all the functions on the inputs, outputs, and returns. The superior ergonomics and the shallow learning curve are clear to everyone who requires ‘real-time’ operation and it cannot be compared with the multifunction knob and/or layered control surface. The in-line recording/mixing console has had many years to evolve and become optimized to the job in hand, although this may not be optimum for other purposes. When it comes to a digital console, the greatest limitation continues to be the rapid, built-in obsolescence factor. However, analog has reached a stage of development that makes it future-proof. This doesn’t mean that it has stopped evolving. Audient, along with many other firms in the industry, work continuously on new topologies and implementations that will keep analog moving forward in terms of performance and usability.

David Dearden is the quintessential man behind the scenes and often refuses to own his audio design guru status. Instead, he says that he is just a tech guy who is deeply involved in designing because of the satisfaction he derives from it. Regardless, his place in the history of audio console design is assured just as his impressive legacy will always have a place in the history of sound.