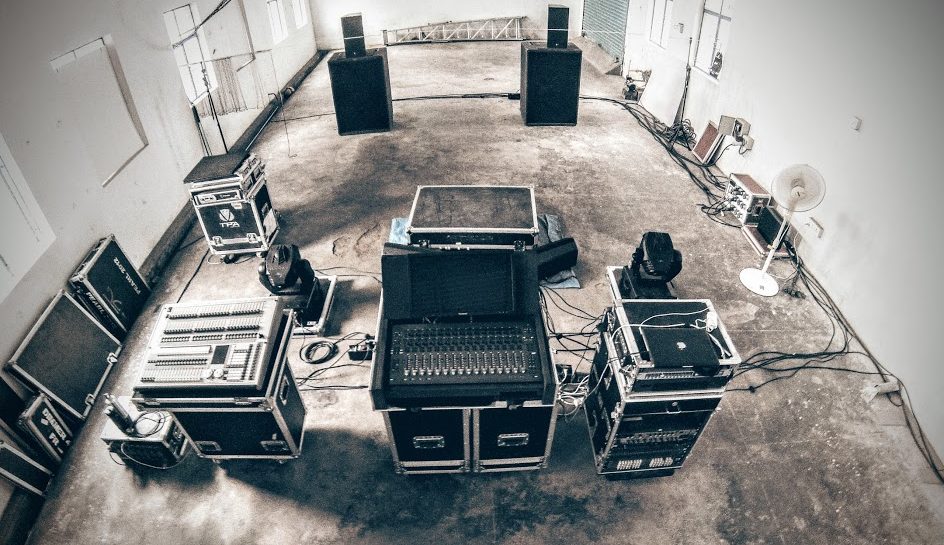 A sound reinforcement system is designed and engineered to make capture and amplify sound and deliver it to an audience. The clear role it has is to distribute sound evenly to the areas where the listeners are, while ensuring that sound is not directed to non-listener areas such as the walls and ceiling. It is also used to transmit the sound to a remote location through an audio or video conference or streaming or record it for later distribution.

When it comes to a live performance, certain instruments can be heard without sound reinforcement, like a cello or organ. However, the soft notes of an acoustic guitar may need to be amplified so that the audience can hear it clearly. This is where a sound reinforcement system comes in.

What Do I Need?

There are four types of devices that work together to create a simple sound reinforcement system— input, processing, amplification, and output. The input device is typically a microphone, mixers and signal processors carry out the processing, while amplifiers, designed to boost the audio signals to the output devices can be single-channel or many depending on the complexity of the system. As for output devices, loudspeakers, headphones or in-ear monitors, do the job.

The main goal for a sound reinforcement system is speech intelligibility— helping every audience member hear the intended words clearly. If you have ever tried to hold a conversation in an empty house, or in a church with high-ceilings, you would understand how time-delayed reflections and echoes created by the design of the room can affect intelligibility. So though sound quality and speech intelligibility owe a lot to the design of the sound reinforcement system, the acoustic design of the room or the venue has a lot to contribute to the end result too. One cannot expect studio quality sound in a warehouse for example.

The design and installation of the sound reinforcement system needs to be such that the voice of the speaker or singer is easily understood while also maintaining a natural voice quality about it. The voice of the singer at a concert should be reinforced in such a way that is not distorted or sound like it is coming out of speakers. This natural quality is dependent on the surfaces that the sound bounces off and is absorbed into— furniture, curtains, people’s clothing and more. The size of the room is a big factor too. The acoustic designer has to keep all of these variables in mind while deciding how to run the sound reinforcement system.

When it comes to sound reinforcement systems, the two most common types are the line array and the traditional point-source system. Consisting of a number of similar, or almost similar loudspeakers arranged in a vertical line, a vertical line array allows sound waves to interfere with each other in a manner such that that they can send sound waves farther than single-source loudspeakers. This is the kind of hanging arrangement you are sure to see in a concert. Contrary to the line array, a point source loudspeaker is a single speaker, or multiple speakers placed further apart, broadcasting a full range of sound from a single point. This arrangement has less range since it radiates sound in a spherical pattern.Depending on the kind of audience and venue, the type of sound reinforcement system must be chosen. Line array systems allow frequency response and sonic coverage for the whole range of the system. They work best with low and mid-range frequencies, but aren’t the best choice if the audience is spread out from side to side or clustered close to the stage. In this case, it will have to be augmented with a point-source system. Point source systems provide a full range of sound without any additional modifications needed.

Sound power or acoustic power, measured in watts (w) is the rate at which sound energy is emitted, reflected, transmitted or received, per unit time. It is neither room-dependent nor distance-dependent. A more important standard of measure to keep in mind while building a sound reinforcement system is the Sound Pressure Level (SPL). A term most often used in measuring the magnitude of sound, it is the main indicator that determines the layout of speakers for the event. To ensure that sufficient sound pressure level is consistently distributed throughout the listening area, besides the performance of the speaker systems used, the positioning and layout tends to be crucial to achieve high-quality sound. The SPL needs to be higher than any background noise or ambient noise to ensure that sound is distributed to the listeners clearly and intelligibly.

For a sound enthusiast, an understanding of the basics of sound reinforcement techniques, problems and troubleshooting is an absolute must to make informed equipment choices. We hope this introduction to the basic factors to keep in mind while designing a sound reinforcement system has been helpful.