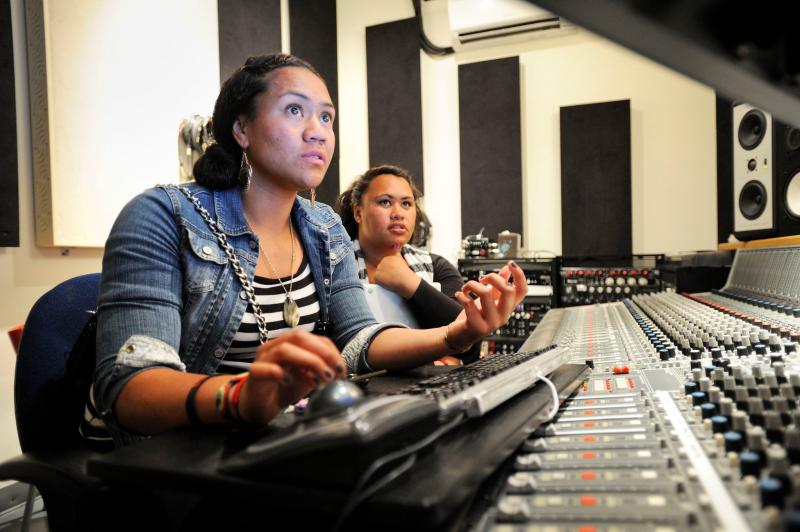 [vc_row][vc_column css=”.vc_custom_1461585051858{background-color: #ffffff !important;}”][vc_column_text]Audio is a profession that has been mostly dominated by men. Statistics by the Audio Engineering Society’s (AES) women in audio committee (now defunct and replaced by the diversity and inclusion committee) roughly estimated that 5% of professionals in the industry were female. With most technical jobs in the sound industry being held by men, it is only understandable that almost all the music that we hear has been worked on and shaped by men.[/vc_column_text][vc_column_text]

Aware of this huge discrepancy, Karrie Keyes, the live-sound engineer for Pearl Jam was inspired to set up SoundGirls.org, an organization she co-founded and that runs Sound Camps in various parts of the US to encourage girls and introduce them to potential careers in audio. Since social and cultural conditioning continues to discourage girls from STEM (science, technology, engineering, mathematics) fields, this camp offers girls the chance to get their hands on the gear and get familiar with it before anyone can intimidate them with the technology. Tiffany Hendren, the other co-founder of SoundGirls.org speaks of her experience of being a monitor engineer overseeing as many as 150 to 175 shows a year. During that whole time she says, she could count on one hand the number of female sound engineers she met. Recounting the challenges that she has faced personally as a woman working in sound, she says she has always felt that she had to be better at her job than a man. Talking about her conversations with other women in the field, she says that they agree with her sense about this. There have been times that Tiffany has lost work because of her gender and also had the band’s wives being uncomfortable with a woman on the tour bus.[/vc_column_text][vc_column_text]Given the heavily skewed gender ratio in the field, getting pregnant or having a family that takes time away from work commitments can end up breaking the careers of women in audio. Besides that, the hours are often long and unpredictable and the work is strenuous. Niranjan Shivaram, founder and CEO, Audio Academy says, “We have had a few queries from women about our courses. Often, it is family opposition that prevents them from joining. Since the practical training involves working on live sound for concerts that happen only at night, families tend to have issues with it. Another reason they often hesitate is because the work is very physical- carrying and lifting equipment and setting up sound for the concert can be tiring. The industry tends to be perceived similarly to how mechanical engineering is perceived. Of course, this is changing slowly and I hope we have women joining our academy soon.”[/vc_column_text][vc_column_text]

Difficulties that women face in other jobs are only amplified in a male-dominated field like audio. Struggling for respect and being second-guessed by their male peers can be a regular part of the work culture. Trina Shoemaker, a Grammy-award winning sound engineer was interviewed by BBC News and she spoke about why female record producers so rare. She says that a producer has to be a person that fits in with the band. If they’re a bunch of young guys being funny, cussing and telling rude jokes, the female producer has to develop a thick skin and not be shocked by that and be strong enough to give back as good as she gets.[/vc_column_text][vc_column_text]Traditionally, audio engineering has relied on apprenticeships with established engineers finding a young professional with potential and interest to mentor and teach him on the job. Such mentorships often leave women out of consideration since older male engineers seldom look for young female engineers to mentor. So there is the old-fashioned barrier of entry to these jobs too.[/vc_column_text][vc_column_text]The final factor for the lack of women in audio could be the lack of knowledge about the field. The majority of women in the industry seem to have learned about it or chanced upon their career by accident or coincidence and not by design. Careers to do with music tend to be divided along gender lines with research showing that boys are more likely to be interested in sound design and mixing, electronic-music programming, audio software design, producing and recording. Girls were interested in being sound designers, music therapists, songwriters, teachers, and composers. Terri Winston, the co-founder and executive director of Women’s Audio Mission (WAM), says she believes women don’t go into audio partly because of how young girls are first exposed to technology. Since women weren’t encouraged to play with tools or learn to build things as children, they often lack interest or confidence in using those skills as adults. Terri suggests that the possible response to the issue lies in how we socialize women in technology and in leadership positions in general.[/vc_column_text][/vc_column][/vc_row]