Long before the music industry in the United States was as ubiquitous or global as it is now, Tin Pan Alley boasted of a group of music publishers and songwriters in New York who shaped popular music in the United States in the late 19th and early 20th century. At a time when New York was the global hub for composing, lyric writing and publishing sheet music, Tin Pan Alley became synonymous with the golden age of American songwriting. An actual place, the genre Tin Pan Alley gets its name from a small section of the street where the industry was based – 28th Street between Fifth Avenue and Broadway in the early 20th century; around Broadway and 32nd Street in the 1920s, and eventually coming to an end on Broadway between 42nd and 50th streets.

While the origins of Tin Pan Alley haven’t ever been officially recorded, the most well-known story told of its origins is that of a reporter, Monroe Rosenfeld who worked for the now-defunct New York Herald, walking down a small block on 28th Street. Hearing the discordant sound of dozens of pianos in the sheet music publishing houses lining the street, competing with each other through the open windows, he supposedly said, “It sounds like a bunch of tin pans clanging.” Pianos were furiously pounded on by these so-called song pluggers to demonstrate tunes to music publishers. Since the small section of street housed the commercial music of songwriters of ballads, dance music, and vaudeville, its name eventually became synonymous with American popular music of the time. Some of the most popular tunes in the American tradition written by names such as Irving Berlin, George Gershwin, Hoagy Carmichael, and Sammy Cahn were written there. 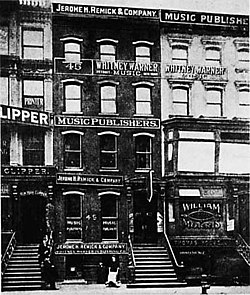 It was a time in history when the popularity of a song was calculated by the number of copies of sheet music rather than by the number of records it sold. This sheet music that was produced was for home consumption, and everyone in Tin Pan Alley from songwriters, lyricists, and popular performers strived to produce music to meet the demand. Following the Civil War, sales of parlor pianos boomed throughout the country, with some estimates putting sales at around 25,000 new pianos a year. In an era before radios and records, parlor pianos made by companies such as Baldwin, Wissner, and Sterling provided the most popular forms of home entertainment. And all these pianos led to a soon prospering business in composing and sheet music publishing.

A vibrant block buzzing with energy and creativity, Tin Pan Alley had the owners of the publishing companies themselves, such as Irving Berlin, Isadore Witmark, Thomas Harms, and the Remick Music Company. The song publishers often had backgrounds as salesmen, as was the case with Isadore Witmark, Leo Feist, and Joe Stern and Edward B. Marks. Thomas B. Harms and Isidore Witmark of M. Witmark & Sons were two of the most successful publishers. Other Tin Pan Alley publishers included Irving Berlin, Inc., Shapiro, Bernstein & Co., and E.B. Marks Music Company. Each house had a staff of composers and songwriters, writing in diverse styles – vaudeville, operettas, rags, comic songs, and ballads. The houses would next hire “song pluggers,” musicians and singers who would then perform the new songs in the music shops to expose them to both the public as well as the entertainers who would visit Tin Pan Alley in search of new songs for their acts. The famous names who began as song pluggers in Tin Pan Alley include George Gershwin, Harry Warren, Vincent Youmans, and Al Sherman. Noted people in the musical comedy world – Paula Edwardes, Marie Cahill, Blanche Ring, Dan Daly, Marie Dressler, and Lew Dockstader all thronged Tin Pan Alley hunting for songs that will add to their fame. The famous building No. 45 published music by George Gershwin, as well as the Wizard of Oz and across from it is a slender, ornately decorated building, No. 40, where Jack Norworth and Albert Von Tilzer wrote: “Take Me Out To The Ballgame.” Prolific and popular, George M. Cohan, wrote over 300 songs at Tin Pan Alley, most notably the World War I hit “Over There,” and “Give My Regards To Broadway.” Other famous songs written here include “Alexander’s Ragtime Band,” “Sweet Georgia Brown” and “God Bless America.” Tin Pan Alley melded various genres to create a brand of music that was witty, urbane, and sophisticated. Though never as famous as Gershwin or Berlin, there were four women—Dorothy Fields, Kay Swift, Dana Suesse, and Ann Ronell whose inspired work was at the heart of Tin Pan Alley.

In a career that spanned five decades, Dorothy Fields collaborated with some of the greats of the industry, writing “I Can’t Give You Anything But Love” with Jimmy McHugh and the anti-Depression classic “On the Sunny Side of the Street”. Teaming up with composer Jerome Kern, she wrote the classic score for the film Swing Time, which included “A Fine Romance” and “The Way You Look Tonight” (the song earned them both an Academy Award). Composer Kay Swift had her first hit at the age of thirty-four with the song, “Can’t We Be Friends.” A year later, she wrote the entire score of the Broadway musical “Fine and Dandy”, which ran for two hundred and thirty-six performances and whose title song continued to be performed long after. A prodigy, Dana Suesse wrote symphonic music as well as popular songs. Orchestra leader Paul Whiteman commissioned her to write for him, and in 1932 presented her at Carnegie Hall playing her composition “Valses for Piano and Orchestra.” The New Yorker dubbed her “The Girl Gershwin,” because of her amazing sense of rhythm and style. She collaborated on a number of songs, writing the 1932 hit “My Silent Love,” with lyricist Ed Heyman, and “The Night Is Young and You’re So Beautiful” with Billy Rose.

Eventually, the growth of film, audio recording, radio, and television created an increased demand for more and diverse forms of music, and Tin Pan Alley was rendered obsolete as other music-publishing centers arose to supply melodies for these genres. The advent of phonographs and the radio significantly reduced the popularity of playing the piano at home and by the 1920s, the once great publishing houses of Tin Pan Alley were virtually all gone. Even today, the giants of Tin Pan Alley from Irving Berlin, Cole Porter, George, and Ira Gershwin, and Rodgers and Hart are household names, with their musicals being regularly revived, and their methods and styles scrutinized and imitated, and their songs are the foundation of jazz and cabaret.