Elvis Presley, Roy Orbison, Carl Perkins, and Jerry Lee Lewis – these stars have been some of the biggest influences on rock ‘n’ roll. What united them beyond their rock ‘n’ roll talent was their famous association with Sun Records, the label that introduced rock ‘n’ roll to the world and its founder, Sam Phillips. 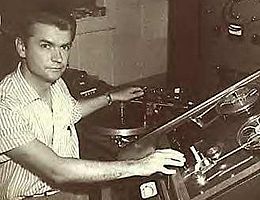 Sam Phillips was fascinated by Memphis, the musical city that was home to an eclectic music scene that included gospel, blues, hillbilly, country, boogie, and western swing. At the young age of 26, he opened his recording studio there, the Memphis Recording Service studio. The year was 1950 and among the first recordings that were cut there were early blues records by Howlin’ Wolf and B.B. King, including King’s “Mistreated Woman,” “Don’t You Want a Man Like Me” and “B.B. Blues.” R&B icons like Bobby Blue Bland, Rufus Thomas, and Little Milton were also among the first to record at the studio, though they weren’t big names at the time. Just a year after Phillips’ recording studio opened, his optimism was rewarded when the track “Rocket 88” by Jackie Brenston and his Delta Cats was released. It is widely acknowledged as being the first rock ‘n’ roll song and the group’s singer-songwriter was the 19-year old Ike Turner.

Soon after that, 18-year-old Elvis Presley, paid $3.98 at the studio to cut a disc with two songs: “My Happiness” and “That’s When Your Heartaches Begin.” A famous anecdote involving Elvis begins with the Sun Records’ receptionist asking him who he sounded like, and Presley replying, “I don’t sound like nobody.” Phillips guided the young singer to his trademark sound which fell into place when Presley sang a version of Arthur “Big Boy” Crudup’s rocker “That’s All Right (Mama)”. The track became a big hit in the south soon followed by his upbeat version of the bluegrass song, “Blue Moon of Kentucky”. This single in 1956 launched the star to regional stardom though the label eventually had to sell his contract to RCA because of financial troubles. Despite this being a big loss since Presley was a star, Phillips didn’t worry because he considered him to be one of his discoveries and the sale also helped elevate Sun Records’ fame.

This evolution in the signature Sun Sound was Rockabilly. Bold lyrically it was bold and musically sparse, it moved people. In the 1950s country music rarely used drums that were essential to jazz, blues, and jump bands. In fact, drums were prohibited on stage at the Grand Ole Opry. However, Sun Sound changed that since Rockabilly drums played an essential role in driving teens across the nation to become enamored with the Rockabilly movement and the revolutionary Sun Sound. 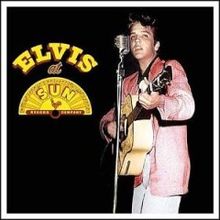 Sam Phillips continued discovering new talent, signing on an amazing number of legendary rockers. Singers such as Sonny Burgess (“My Bucket’s Got a Hole in It”), Charlie Rich, Junior Parker, and Billy Lee Riley recorded for Sun with some success, and others, such as Jerry Lee Lewis, BB King, Johnny Cash, Roy Orbison, and Carl Perkins became stars. In a short while, Sun Records had cemented a reputation throughout Memphis as a label that treated local artists respectfully and with honesty. Sam provided a non-critical, spontaneous environment that invited creativity and vision. In 1955 Johnny Cash’s debut single “Cry! Cry! Cry!” became a Top 15 country hit and later in the year, “Folsom Prison Blues” earned Cash a spot on the Louisiana Hayride. The next year, “I Walk the Line” was a pop-country crossover smash hit and Cash became a star. The success that came to Cash, Carl Perkins, Roy Orbison, Jerry Lee Lewis, and Charlie Rich was also aided by increased visibility and airplay that they received after Presley’s success. Many of them went on to become future rock and country legends.

Sam Phillips had a great ear for rock ‘n’ roll and had a knack for recognizing a priceless moment. In 1956, while Sun Records was at the peak of its success, Carl Perkins was recording a track at the studio one day with Jerry Lee Lewis on piano. Johnny Cash was hanging around the Sun headquarters, waiting for a paycheck when Elvis Presley stopped by. Sensing a golden moment, Phillips put the four superstars in a studio together and let them jam while he recorded the results. Playing everything from country standards, gospel favorites to their own tracks, the recordings of the session became legendary, and though the “Million Dollar Quartet”, as they were referred to, didn’t perform together in the future, they went down in history as the first supergroup.

Slowly Sun Records’ success began to fade and didn’t sustain itself in the next decade. By the mid-’60s, Sam Phillips had almost stopped recording and in 1968, he sold the studio that he himself had dubbed “the birthplace of rock ‘n’ roll.” The entire Sun catalog of approximately 7,000 master recordings was bought by Nashville producer/Mercury Records executive Shelby S. Singleton for $1 million with Phillips retaining a stake in the company and his music-publishing rights. However, his place in history was assured because he helped bring rock ‘n’ roll to the masses. 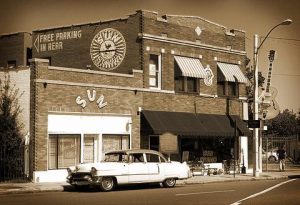 Years later, in 1985, the building at 706 Union that previously housed Sun Records became a recording studio again when producer Chips Moman assembled Johnny Cash, Roy Orbison, Jerry Lee Lewis, and Carl Perkins to record the LP Class of 55: Memphis Rock & Roll Homecoming. The building became even more famous with its bright yellow Sun Records logo, with 11 sunbeams, as it opened to tourists who arrived from all over the world beginning in 1987.

Since then U2 has recorded there, cutting three songs that were eventually part of their Rattle & Hum LP and documentary film. They also cut “She’s a Mystery to Me” there, which Bono and the Edge wrote for Roy Orbison. Other names such as Beck, John Mellencamp, Chris Isaak, and Def Leppard, among many others have recorded there. In 2003, The National Parks Service designated Sun Studios as a National Historic Landmark.

Sun Records will always have a place in the sun because of the sheer vibrancy of its music that has stood the test of time. A pioneer in recording music of unparalleled diversity in the incubator of creativity that was Memphis, Sun Records’ music reached across race, age and gender boundaries to leave an indelible mark on the global music scene.