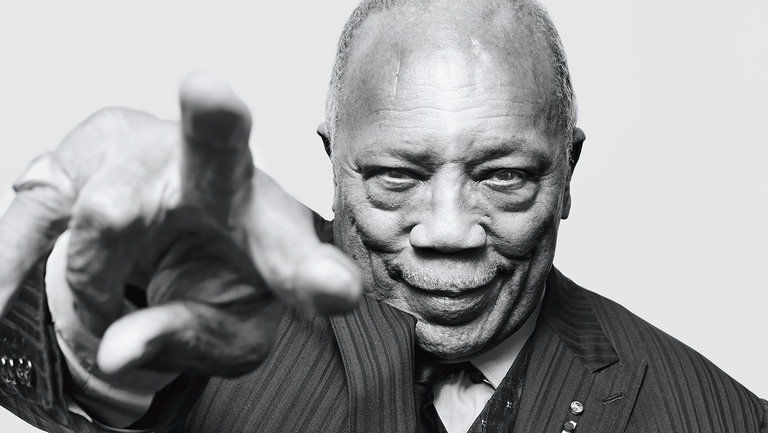 A multi-faceted musician, composer and record producer, Quincy Jones has earned his place in the history of music. The most Grammy-nominated artist in history, Quincy Delight Jones, Jr, often known just as “Q”, has 79 nominations and 27 wins. Born in Chicago on March 14, 1933, he grew up in Washington, where he studied the trumpet and worked locally with then little-known pianist-singer Ray Charles. Teenage Ray Charles got Quincy interested in arranging and he went to study briefly at the prestigious Schillinger House, now known as the Berklee College of Music, in Boston in the early 1950s. 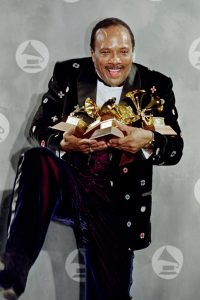 Quincy left Schillinger House to begin touring with Lionel Hampton as a trumpeter and arranger and soon made a name for himself as a talented freelance arranger, working with artists such as Clifford Brown, Gigi Gryce, Oscar Pettiford, Cannonball Adderley, Count Basie, Dinah Washington, and many others. In 1956, he toured with Dizzy Gillespie’s big band and also recorded his first album in the same year, working in Paris for the Barclay label and continuing to compose as an arranger and producer. Tracks such as “Stockholm Sweetnin’,” “For Lena and Lennie,” and “Jessica’s Day” were Quincy’s successes from this period. He was the artists-and-repertoire director at Mercury Records and slowly began producing his own increasingly pop-oriented records there.

In 1961, Quincy Jones was named a vice president at Mercury creating history as one of the first African Americans to hold a top executive position at a major American record label. Throughout the 60s, Jones recorded occasional jazz dates, arranged albums for many singers including Frank Sinatra, Peggy Lee, and Billy Eckstine. Sinatra, who admired Jones’ work with Count Basie, wanted some of that swing on his own albums. Those were the days when black people were not allowed into casinos and Quincy and Basie brought their entire band to back Sinatra. Sinatra hired a bodyguard for Quincy and soon the famous producer had his sights set on scoring for Hollywood.

Despite racism and being shut out of music in Hollywood, with the help of advocates such as Henry Mancini, Quincy connected with Sidney Lumet. Soon, his talents were evident and he got his name in the credits for classics such as The Pawnbroker, In the Heat of the Night and In Cold Blood. He went on to produce over 50 scores for film and television and was a pioneering African-American musician in the Hollywood arena at the time. Aretha Franklin’s 1973 album “Hey Now Hey (The Other Side of the Sky)” was produced by him.

He then went on to work for the A&M label from 1969 to 1981, taking a short break to recover from an aneurysm in 1974. The musical shift from jazz to pop took place at this time. Becoming one of the most famous producers in the world, his success allowed him to start his own record label, Qwest, in 1975. Quincy produced the soundtrack for the musical adaptation of “The Wizard of Oz, The Wiz”, starring Michael Jackson and Diana Ross in 1978. He then produced Michael Jackson’s all-time best-selling album Thriller in 1982. Throughout the years, Jones worked with a veritable roster of artists from all fields of popular music. Besides being nominated for 75 Grammy Awards and winning more than 25, he has also won seven Academy Awards and received an Emmy Award for the theme music he wrote for the television miniseries Roots.

Besides music, he is also known for his philanthropic work and founded a charity for youth in 1985. At the American Music Awards ceremony in 1985, he used his clout to bring together the major artists of the time to record “We Are The World” to raise money for victims of famine in Ethiopia. Over the span of his extensive career, he has worked on a number of causes including the Quincy Jones Listen Up Foundation which built more than 100 homes in South Africa in 2001. His activism, however, had a very early beginning in the 1960s with his support of Martin Luther King Jr. He is one of the founders of the Institute for Black American Music (IBAM) where events are held to aid the creation of a national library of African-American art and music. Jones is also one of the founders of the Black Arts Festival in his hometown of Chicago. 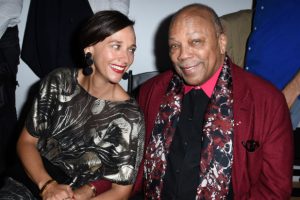 In the field of entertainment, Quincy Jones has introduced the audience to famous names such as Oprah Winfrey, Whoopi Goldberg, and Will Smith. It was in 1985 that he made his debut as a film producer with the film that he produced “The Color Purple” receiving 11 Oscar nominations that year. The television series “The Fresh Prince of Bel-Air” (1990-96), starring Will Smith was also produced by him.

In 2013, Jones was inducted into the Rock and Roll Hall of Fame. Last year, the documentary “Quincy” (2018) that chronicled his life and career spanning over seven decades was released. It was directed by his daughter, actress and screenwriter Rashida Jones, and filmmaker Alan Hicks. Suffice to say, Quincy Jones’ influence on popular music from the 20th or 21st century no matter what the genre is indelible.