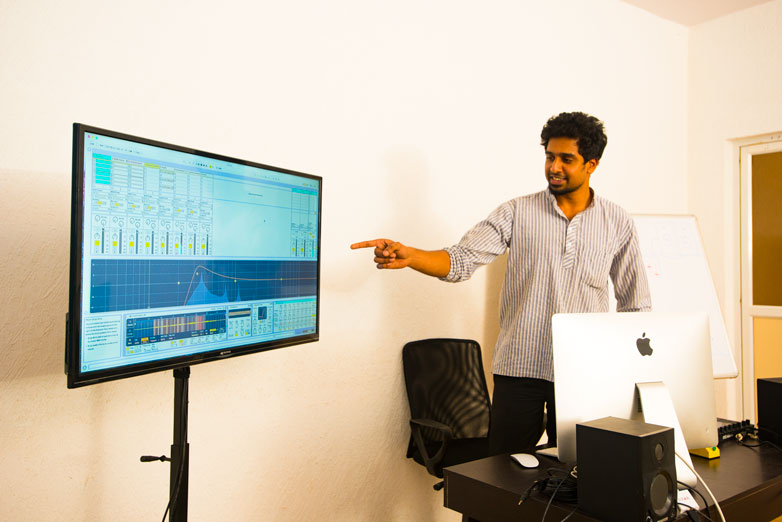 What do you do when you know exactly where your passion lies but the training that you need to pursue in order to do it is elusive? Gautham Pattani started out as a musician living in Chennai and while it ignited his enthusiasm during college, figuring out how to keep music in his life after college was a challenge. After all, it is a phase in life when the world expects young adults to get a ‘real’ job and begin their careers. 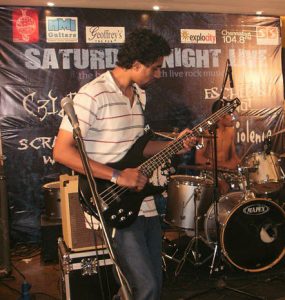 Gautham with his band in Chennai

During the summer right after college, Gautham chanced upon a workshop in audio engineering. It was a three-day workshop held at a recording studio, in which the facilitator went over the rudimentary concepts of everything that went into the recording and studio process for making music. While it was a basic introduction, the workshop stoked his interest and it was right then that Gautham made a clear internal decision to follow this path. What seemed like the next obvious step turned out to be very challenging. When Gautham began searching for schools where he could train in India, speaking to professionals and people in the industry in the process, he couldn’t find a school in the country where the training was in-depth and substantial. Eventually, he settled on a school in Pune where he signed up to do a diploma in sound engineering.

The standard of teaching left a lot to be desired with the teacher mostly teaching out of books. There was little to no practical training and Gautham’s deep desire to learn wasn’t satisfied at the place. However, there was an opportunity to intern at the Institute as the studio manager for three months, which he grabbed immediately. The internship required him to manage studio bookings. Since he mostly had the studio to himself during this phase, there was also the added benefit of being able to get his hands on the equipment in the studio. For three months, Gautham would head to the studio at 6 am and experiment with the gear till noon. He did his best to teach himself the nuances of studio sound by working on his own music.

Another opportunity came along when a film industry professional visited the institute to teach. Since the audio professional worked on location recording and sync sound in films, he was deeply practical and interested in imparting hands-on skills to the students. Signing out equipment from the institute, a few of the students who were keen to learn would pile into his car and drive out to experiment with field recordings. This was another threshold moment for Gautham during which he realized that working with all aspects of sound interested him above everything else.

After the course was over, the decision had to be made whether he would stay on in Pune or head back to Chennai. He decided to head home and began looking for work in studio sound and recording. The work scenario didn’t seem viable because the only options that he found at the time were unpaid ones. After a while, Gautham got in touch a distant family relative who happened to be a sound engineer with his own studio in Delhi. A visit to meet this relative gave him a chance to tinker with equipment in the studio again and speak at length with a professional working in audio.

After this visit, Gautham made the decision to move to Bangalore just as this relative also told him about an opportunity to work with Hansa Pictures, a company that worked in the area of sound installations and solutions for various organizations. Once he began working there, he often met clients as a representative of the company. Despite the job being his first experience with installations, he had the chance to work on projects at the Collector’s office, the Don Bosco Institute, and also got to visit a nuclear power plant as part of a team pitching for a project. During the year that he worked there, he also got to be part of the solutions team when the first Maserati showroom was being set up in MG Road and also enjoyed the process of working with an architect to design and carry out sound installations for a home chapel for a client. While the job gave him exposure to various aspects of sound in the commercial space, he began craving a deep dive back into pure sound and working with it. 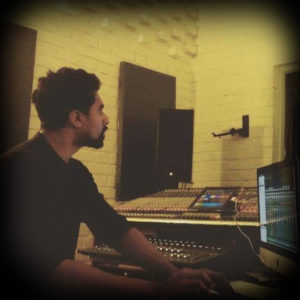 Gautham at the studio in Audio Academy

A musician that he had been jamming with mentioned Audio Academy since he had worked with them. Gautham had heard about Audio Academy already and had also encountered the quality of equipment and teaching there during one of his previous trips to Bangalore. It was when a showcase of the students of Thermal and A Quarter was taking place at Phoenix Mall and Audio Academy was in charge of sound. The company that Gautham was working with was in charge of lighting. He remembers being really impressed when he saw that the Academy’s students were getting hands-on experience doing sound at a real live sound gig, quite the opposite of the type of training that he had received. After the discussion with his musician friend, he interviewed with Audio Academy and began by helping with marketing at the institute. With the management being really open to him picking up more responsibility, he slowly began picking up the nuances of studio work and eventually went on to now to teach studio and music production, and now heads the studio department.

Sensing Gautham’s keen desire to learn, his unbeatable work ethic and passion for sound, Audio Academy offered Gautham the chance to spend over a month learning sound design at Vijay Rathinam’s Audioville studio, Chennai. The studio facility for film post-production in sound design, audio editing, and foley gave Gautham the chance to observe and learn from an industry professional. Vauhini Venugopal, co-founder, and CEO of Audio Academy says, “Gautham has been married to the studio. Coming in as early as 5 am and leaving at eleven in the night, there is absolutely no substitute for this sense of commitment and drive that he has. It is what has got him where he is now- an expert in studio recording and sound.”

Gautham acknowledges the role that Audio Academy has played in his career path. He says that it is thanks to the freedom to work and learn on the Academy’s state-of-the-art equipment, that he is confident when it comes to handling studio recordings and the nuances of music production. He now has his sights set on being a part of “Mix With The Masters”, a seminar that offers the in-depth, first-hand opportunity to ​learn the entire process of music production, mixing and mastering from the world’s top engineers and producers in France. Thanks to Audio Academy, this will soon come true!