Dr. Rajesh Khade has just finished a long day of work at the Government Medical College in Miraj, a city in Sangli district in Maharashtra and yet this is just one part of his career. Working as a medical officer and conducting autopsies is a high-pressure job. Besides this, Rajesh is the official SMAART (an audio analysis software) trainer for India and is a restaurateur, running ‘Burger Point’, a popular restaurant in Miraj. This alumnus of Audio Academy is a renaissance man who has found time for each of the passions that have captured his imagination.

Having had an early introduction to the magic of music and audio thanks to his father who was a professional drummer, Rajesh also got to attend many live shows in which his father performed. These experiences gave him the early certainty that he had an abiding interest in everything audio. During school and medical college, Rajesh kept this passion alive and performed as part of a band. However, he and his bandmates were often frustrated by the quality of live sound that the audience was experiencing as his band performed. Driven to learn the nuances of live sound, he made his own beginning by buying an analog mixer and teaching himself how to use it. It so happened that during a show, the live sound technician who was supposed to accompany the digital console didn’t turn up and Rajesh got a chance to mix a show without any experience with his analog mixer.

This was the point at which he decided to get trained in the use of digital VENUE consoles. Having researched avenues of training extensively, he chose the VENUE Console Certification course taught by Niranjan Shivaram, co-founder of Audio Academy. Rajesh speaks of the experience as being memorable- three days of training, meeting Niranjan and speaking extensively to Audio Academy students who were among the attendees. During the course of the workshop, he came to the realization that learning to operate the Venue console was only one small part of learning the basics of audio. Since he wanted a thorough foundation in all things audio, he decided to sign up for the Recording Arts and Live Sound Engineering course. This was not an easy decision since he was already practicing as a doctor at the government medical college in Miraj in Maharashtra. However, he was determined to make this work. 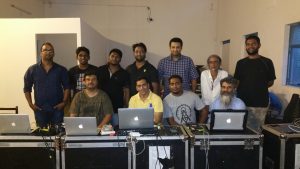 Audio Academy and he discussed ways to work around his responsibilities and came up with alternatives so that Rajesh could complete the course and fulfill its requirements. From Monday to Friday every week he would attend classes in Audio Academy, being part of two to three different batches of students and also do all the homework as part of the course requirements. On Friday night, he would take a bus to Kolhapur and begin work on Saturday morning at the hospital, continuing until Sunday night. Then he would head back to Bangalore. Despite this jam-packed schedule that left him no time for anything else, he completed the course in four months.

Speaking effusively about his learning experience, Rajesh states decisively that for anyone interested in getting a thorough training in live sound, it doesn’t get any better than Audio Academy. The combination of theory classes which are consistently accompanied by practical training and experience is unlike any other training out there. The learning curve was very big at the academy according to Rajesh. He considers himself lucky since the time during which he was training coincided with the music festival season and therefore he got to work intensively as a stage tech in festivals such as Spandan at JIPMER, Pondicherry, Bangalore Open Air Festival, Mysore Dasara Festival, and Indie March. The rigor of the training was such that each trainee worked on forty shows to complete the course successfully.

Once he had completed his Audio Academy course, he began working as a freelance systems engineer. He credits Niranjan with inspiring him to pursue this particular area of interest and also for being his first trainer. Soon, this passion took Rajesh to Germany where he did a course in systems engineering, training with Bob McCarthy, considered to be the godfather of systems engineering and author of the book Sound Systems: Design and Optimization. Since the field of systems engineering is one which Rajesh says is neglected in India, he also began to post videos on a youtube channel for people who wanted to learn but did not have the resources. This eventually led to more freelance work as a systems engineer and he got onboard with SMAART as their dedicated trainer in India. Rajesh’s USP as a trainer is that he offers training in Hindi and Marathi besides English, which has been instrumental in his popularity as a trainer and in bringing about rigor in the training accessible in places outside the big metropolitan cities.

With a restaurant team that ensures that his third passion runs itself with little to no interference from him, Rajesh enjoys dividing his time between his other two passions- audio and medicine. Going to work for him is a pleasure since he has chosen to do everything that he loves.