Sometime after the Tin Pan Alley era of music.
In the late 1950s, located at 1619 Broadway in the heart of New York’s music district, stood the Brill Building. It became the center of brilliantly crafted, professional songwriting and music publishing that carried with it the youthful urgency of rock and roll. 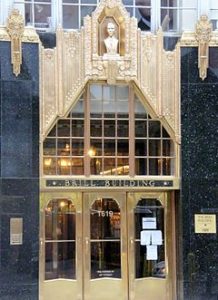 The Brill Building (named after the Brill Brothers who would later buy it) was rented out to music publishers by its owners because of a deepening ‘Depression’ and the first three companies who rented space there – Southern Music, Mills Music, and Famous-Music – were soon joined by others. By 1962, the Brill Building housed 165 music businesses that wrote material for girl groups and teen idols in the early 1960s. It was the place where one could write a song or make the rounds of music publishers until someone bought it. On another floor, you could get a quick arrangement, lead sheet for ten dollars and get copies made at the duplication office, book an hour at a demo studio and hire musicians and singers to cut a demo of the song. Record companies, publishers, artist managers, and even artists were all at the building so once a demo was done, you could get around to finding the people to buy it right there at the building.

A hub of rock and roll, the specialized roles in the process of making music in the Brill Building had professional songwriters working closely with producers as well as artists and artist managers to match specific artists with appropriate songs. The flagship company of Brill Building pop music was Aldon Music, founded by Al Nevins and Don Kirshner. The duo was striving to meet two important demands of the music market that emerged in the late 1950s. One, the record labels such as Columbia, RCA, Capitol, and others were attempting to find a way to make rock music fit into the long-established Tin Pan Alley mode of music-selling. Two, these record companies, had a huge need for quality songs that could become hits for their many recording stars. To meet these needs, talented songwriting teams became an essential part of the process of making Brill Building Sound.

Well-known songwriting teams from this era include Gerry Goffin and Carole King, Barry Mann and Cynthia Weil, Jeff Barry and Ellie Greenwich, Sedaka and Greenfield, Bacharach and David and Doc Pomus and Mort Shuman. These songwriters churned out one hit after another for such groups as the Shangri-Las, the Shirelles, the Ronettes, the Righteous Brothers, and the Chiffons. The team of Jerry Leiber and Mike Stoller wrote and produced their biggest hits with the Coasters and the Drifters. Usually accomplished singers as well as writers, a few had hits of their own as performers, like Neil Sedaka with “Calendar Girl” and Barry Mann with “Who Put the Bomp.” The professionals from this era focused on elevating the craft of songwriting. They wrote almost exclusively for a youth audience with teen idols such as Paul Anka, Neil Sedaka (who teamed with Howard Greenfield), Gene Pitney, and Bobby Darin building careers composing Brill Building pop. 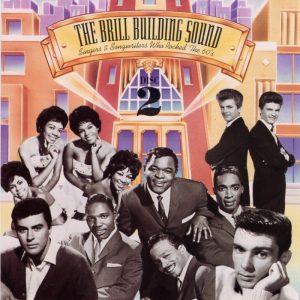 Since these songwriters worked together closely on an everyday basis, they developed the common style that became Brill Building Sound. Songs such as -Will You Love Me Tomorrow? Happy Birthday, Sweet Sixteen, Then He Kissed Me, You’ve Lost That Lovin’ Feeling and hundreds of others, spoke directly to teenagers, expressing their thoughts, dreams, and feelings in a simple manner that made many of these songs huge hits.

Phil Spector, who was referred to as “The First Tycoon of Teen” was someone who played a crucial role in pairing the intensity of rock and roll with the expansive power of the orchestra. He was legendary for constructing what came to be known as The Wall of Sound—a thick, heavily layered orchestral backdrop. Many of the most memorable works of the time—Ben E. King’s “Stand by Me”, The Drifters’ “This Magic Moment”, Dionne Warwick’s “I Say a Little Prayer”, to name just a few still endure as classics.

The songwriting team of Jerry Leiber and Mike Stoller had begun writing hit songs in the rhythm and blues vein beginning in 1950 and were precursors to this era. Although white, they had a true feeling for black rhythm and blues music, and they were responsible for many hits on Atlantic Records with the Coasters such as “Charlie Brown,” “Young Blood,” “Searchin’,” and “Poison Ivy.” With an important role in the creation of rock and roll, they used their rhythm and blues sensibilities to write some of Elvis Presley’s biggest hits in the 1950s. They continued their success into the 1960s, adding to the larger world of Brill Building pop.

The era of “Brill Building Sound” was over by 1965 with the arrival of the Beatles in the USA in 1964. The iconic band brought a shift to the music industry since they were not only great performers; but also great songwriters. Since rock and roll had matured as a musical style, its sound diversified and several artists and groups began writing and performing their music. As a result, the need for professional songwriting decreased and the type of assembly line songwriting that existed with the Tin Pan Alley and Brill Building eras started losing steam. Even though the Brill Building may not be churning out songs anymore, the songwriting producing teams that are responsible for most modern top forty singles follow the template that was laid down by the Brill Building.