Audio Networking and Its Implications for Sound

There has been a concerted call towards going digital in pro sound applications and the real-world applications of this brand of networked sound have shown up in places as diverse the G8 Summit for sound reinforcement, the Sydney Opera House and recording applications at a 500-member church in Vancouver, Washington. Digital audio networking systems offer plug-and-play operability by putting digital audio onto a local area network. While this development that merges audio with IT has a lot of potential benefits, it also comes with its own unique set of challenges and costs.

For decades now, computer networks have been used to connect multiple computers and other digital equipment. It is a cheap and efficient way for devices to share data and for users to communicate and share the same piece of equipment, such as a printer or a storage device. In audio, as the number of channels has grown, digital audio systems have taken the dominant role, and various control and storage possibilities have emerged. Audio networking is nothing more than “audio over IP”. Just as the scale of computer networks can range from connected devices in a home all the way up to massive corporate networks that connect with hundreds of computers and other devices and possibly cover several kilometers, audio networking is also scalable and applicable in a number of scenarios. The tremendous benefits of audio networking include minimizing setup time, reducing the number and size of cables required, connecting different locations and hardware,

and tying together various elements of audio production — recorded or live — in a simple, efficient way. For example, by just using an Auvitran AVB central router, a number of venues in a university — activity centre, educational classes, lectures, and administrative centre — can each share content in real time with each other, with the audio in one location being heard, without any significant latency, in any of the others, essentially creating instant overflow spaces.
When it comes to the analog audio systems that are in use for distribution and routing, the limitations become evident once the systems are scaled up. Signal degradation during transmission (displayed by the loss of highs, noise/hum pickup, and signal level drop), distance limitations, and the requirement of a dedicated cable and connection for each channel in each direction of signal flow all hamper the quality of the networked audio. However, with a digital audio network, the requirement for cables is reduced considerably, signal degradation is eliminated, the system configuration is much more flexible and high channel counts are easily accommodated because the cables required aren’t as many. Furthermore, outputs can be seamlessly routed to multiple destinations without loss. 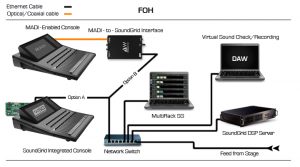 CobraNet and EtherSound were early protocols for transmitting digital audio via Ethernet network connections. However, the details of these earlier systems tended to be opaque to people looking to use them purely for audio. A product of the times that they originated in, more than two decades ago, before streaming was as every day as it is now, they were very much IT entities, and therefore far less transparent. Currently, Dante (Digital Audio Network Through Ethernet), developed by Audinate is the most pervasive. An uncompressed multichannel digital media networking technology that combines software, hardware, and network protocols, Dante uses standard Ethernet technology to allow for the transfer of large numbers of audio channels among multiple locations, over long distances, and with low latency. Dante’s specs include up to 1,024 channels per network node with no limit on the number of nodes, a minimum latency of 150 microseconds, sample rates up to 192kHz, and resolution up to 32 bits. As of early 2016, over 200 companies license and support Dante with their products, since the use of Dante requires that manufacturers license the technology from Audinate. Another big player in the networked audio category is AVB (Audio Video Bridging), a set of standards developed by the Institute of Electrical and Electronics Engineers and promoted by the AVnu Alliance. AVB is an ‘open’ protocol and does not require manufacturers to license the technology. Manufacturers including PreSonus, MOTU, Avid, and more have developed products compatible with AVB. AVB works by reserving and dedicating a portion of the Ethernet bandwidth for AVB media use. The benefits are said to be precise synchronization, data management for media streams, “admission controls” (control over transmitters and receivers in the system), and identification of participating devices in the AVB network, which assures the quality of the audio system.

While putting audio on a network can offer institutions such as universities and churches location flexibility and less costly expansion capability, the IT skills needed to install and terminate that switch and manage network traffic aren’t as readily available as more conventional pro audio skills. It works best when the institution has a staff member who understands Ethernet networking- since it goes beyond the skill set of a person who is trained in only analog audio. The resource person needs to know the ins and outs of networking at a certain scale. For instance, when doing multicast streams, issues such as quality of service (QoS) – relating to measurements of service parameters including error rates, bit rate, throughput, transmission delay, availability, and jitter need to be taken into account. Also, while most experts would recommend a separate LAN or V-LAN for audio, this is not always feasible in the lean sort of enterprises that might use networked audio. A certain amount of bandwidth is needed to keep the audio-data packets properly timed and synched. Having that data share a converged network with other data can make things problematic. Another issue includes the unpredictability of software and firmware updates, from Dante and manufacturers of Dante-enabled devices.
Networked audios have been adopted rapidly in some markets such as live sound, where it reduces the weight of traveling systems by hundreds of kilos of copper cabling. When it comes to places of worship, the largest ones seem to be adopting the concept first, thanks to their greater access to knowledgeable staff. As costs come down and the promise of true plug-and-play operability comes to fruition, the networked sound will likely become the norm in a few years, with systems renovations offering the opportunities to implement it.