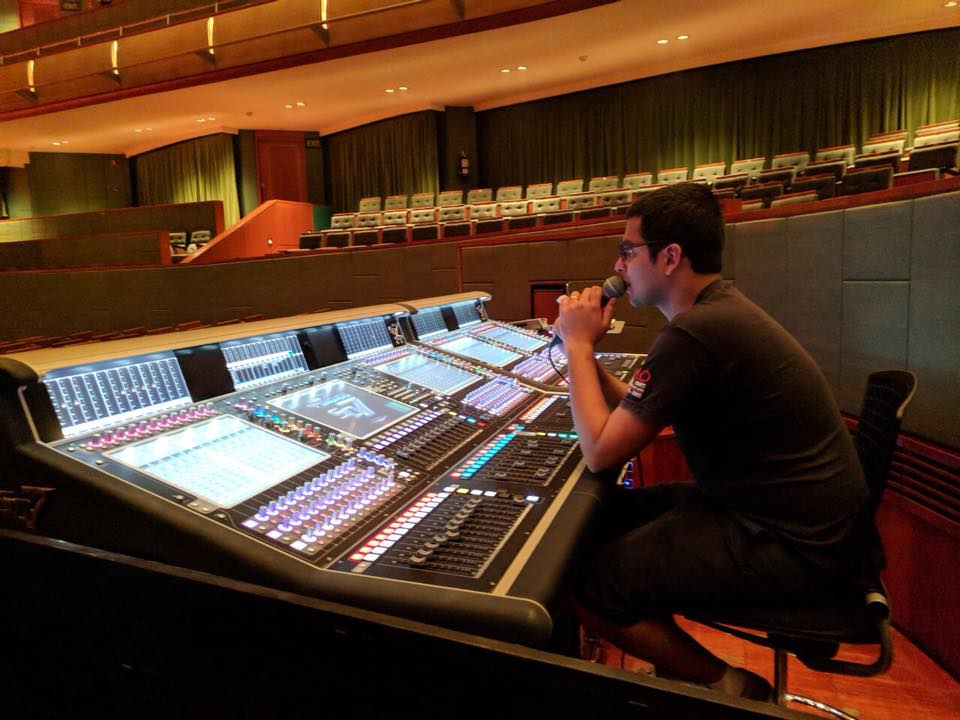 It is not typical for a boy in school to chance upon his true calling in eighth grade. And it is even more unusual for him to eventually decide that college and graduation — the path that is usually laid out for everyone after school isn’t something that he is meant to follow. However, for Ashwin Shetty, getting started in the audio industry and continuing to follow his calling was all of that and more. 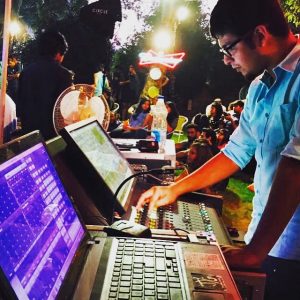 Hands-on Learning in the early years

A student of the Madras Christian College Higher Secondary School, Ashwin was hanging out with friends at the school auditorium when a chance encounter with Prithvi, the proprietor of Prithvi.s, a Chennai-based sound, and light rental company got him started in sound. Prithvi asked him if he’d like to learn the ropes at his company and Ashwin readily agreed, going regularly to the warehouse and learning on the job while still in school. By the time he had finished his high school graduation in 2006, Ashwin realized that nothing made him happier than working in audio. He spoke to his parents about his intention to pursue sound like a full-time career rather than head to college. While his parents were supportive and he continued living at home, for a long time the only manner of income that he received at Prithvi.s was transport money, getting food while at work and enough chai and biscuits to keep him going while he was learning all about audio.

Ashwin’s circuitous journey in the sound industry and the process of learning the ropes wasn’t without its mishaps. On the first ever show that he was in charge of sound, he managed to blow up a couple of speakers. However, he remained dedicated to his craft and eventually was given the responsibility of setting up and managing sound at weddings that were held at the Railway club in Perambur, Chennai. His learning process was totally hands-on beginning with gigs in small venues with inadequate sound systems and terrible acoustics and slowly learning from the ground up how to make the show sound good in less than ideal circumstances. As a young professional in sound, Ashwin was raring to go, experiment and learn as much as he could and with this in mind, he approached Picture Productions, Chennai for inventory for his shows. It was a testament to his enterprising nature that he began handling sound for live shows and festivals for Picture Productions along with his responsibilities at Prithvi.s.

It was at the time that Ashwin had branched out that the alternative rock band with a dedicated fan base, Junkyard Groove had just become the first Indian band to perform at the Desert Rock Festival in Dubai and had also won the competition, beating every other band there. Fresh from their success out of the country, they played a concert in Chennai, where Prithvi.s Sound was engaged as the sound and light vendor. Ashwin threw in the deep end and came through wonderfully. Since the band loved the way they sounded, he became their sound engineer, traveling with them on tour. As his reputation as a live sound engineer grew, he was contacted by the band Molotov Cocktail whose lead guitarist was the brother of the vocalist from Junkyard Groove. As a relatively new live sound engineer, Ashwin did everything that he could for the band to prove himself. From fetching tea and coffee for them and ensuring that they were on time, to make the band sound as great as possible on stage — he did all of it. 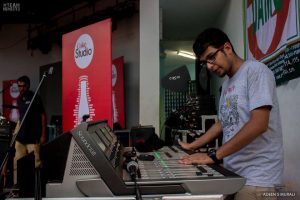 The excitement and unpredictability of being in charge of sound at live events gave Ashwin what he liked best — a chance to put his skills to good use, experiment and make great sound happen at live shows. Making real-time decisions about live sound during these shows allowed him to develop his skills in mixing at various events. As word spread in the industry about his work and reputation, he began working on shows for artists such as Andrea Jeremiah, the playback singer, musician and actress who works in Tamil and Malayalam cinema and Suchitra Ramadurai, the Tamil, Malayalam and Telugu playback singer. He also began freelancing for Sound Garden a sound rental company in Pondicherry.

Events such as the IndiEarth XChange Festival, India’s premier annual trade event for independent music, film, and media, followed, with him handling live sound duties for the festival for a number of years. Other prominent festivals where he was the part of the sound or lights include Bangalore Open Air, India’s only dedicated heavy metal open air annual music festival; the India Surf Festival (ISF), India’s annual surfing festival; Indie March, a showcase of leading independent Indian musicians; An Ode To The Blues Festival, an annual festival that features a line-up of Indian and international Blues artists; Spandan, the annual intercollegiate cultural, literary and sports festival of the Jawaharlal Institute of Postgraduate Medical Education & Research (JIPMER), Pondicherry, a host of other diverse events and gigs. 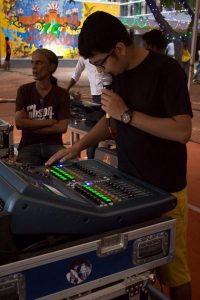 As Ashwin traveled far and wide handling live sound for various events, Jaigopal Sankaran, also known as Joe, the founder of Sound Garden recommended Ashwin to Audio Academy when the organization was looking for a young and dynamic person to be in charge of its live events. A conversation between Ashwin and Niranjan, the co-founder of Audio Academy at the John McLaughlin concert followed and led to Ashwin packing his bags and moving to Bangalore in two weeks. While he was primarily on board for live sound, he also teaches the live sound curriculum now and liaises with industry as the point person for the live sound wing of Audio Academy. Before leaving Chennai for Bangalore, Ashwin had begun exploring various aspects of stage lighting and experimenting with it. He even got to handle the lighting for a couple of shows and play around with how lighting comes together with the other aspects of the show. At Audio Academy, he got a chance to take this interest further and was instrumental in developing and shaping the stage lighting course that he now teaches there. Besides being a freelance audio engineer, he also is a lighting engineer for bands for their shows. Niranjan Shivaram, co-founder and CTO of Audio Academy says, “Ashwin is a huge asset to Audio Academy. Fun loving, hardworking and enterprising, he is an excellent engineer who’s quick to learn. A thorough professional we can totally rely on, it has been great to have him on our team.”

Currently, he is the audio engineer for the band Mud Road a fun country band, and When Chai Met Toast, a happy Hinglish Tanglish band. Ashwin is a mainstay lighting engineer with Avial the alt-rock band and Swarathma the indie folk band. Every now and then, he handles sound for bands such as Agam, Skrat, F16, Sid Sriram, and the like.