Earlier this year, Ariana Grande’s song “7 Rings” topped the Billboard Top 100. The song begins with a sample of the song “My Favourite Things”, the classic song from the movie ‘The Sound of Music’. Thanks to this, 90% of […]

Audio Academy was part of the recently concluded Palm Expo 2019, an exposition for pro audio, lighting and AV integration systems. The Indian Recording Arts Academy (IRAA) Awards that honors excellence in audio recording and mixing was also part of […] 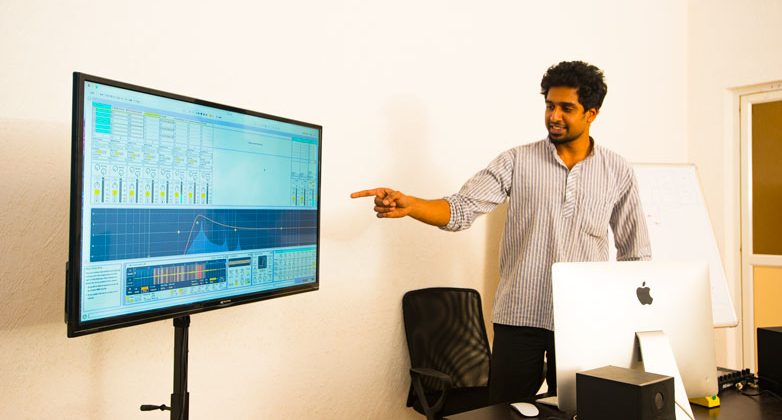 What do you do when you know exactly where your passion lies but the training that you need to pursue in order to do it is elusive? Gautham Pattani started out as a musician living in Chennai and while it […]

Any profile of David Byrne is sure to struggle with deciding on a descriptor to use for him. Far more than an art-rock cult hero, he is an Oscar-winning film composer, record producer, actor, a collaborator with Robert Wilson and […]

1991 was a groundbreaking year in music. Nirvana, Pearl Jam, Metallica, and Red Hot Chili Peppers all released full-length albums, each with their distinctive sound. In the excitement over these albums, My Bloody Valentine’s musical masterpiece ‘Loveless’ did not get […]

Brian Eno is the one name in music who is connected to musicians as diverse as U2, Luciano Pavarotti, Nico, Karl Hyde and Coldplay. Famously having described himself as a ‘non-musician’, Brian Eno has been credited as composer, singer, keyboardist, […]

It was a different time. Eleven years of stifling conservatism by Prime Minister Margaret Thatcher and her successor, John Major had just ended. The internet was relatively new and not as widespread as it is now. Britain was going through […]

Ever heard of Taryn Southern? You might not be familiar with the YouTuber and American Idol contestant unless you’re a dedicated viewer of the show or frequent her channel on YouTube. The pop artist hit the headlines in 2017 when […]

As an American rock band that came to known as much for their music as their experimentation, The Flaming Lips began their tryst with pushing the envelope with their 1997 album Zaireeka. The album consisted of four different CDs that […]

The Revolution of Immersive Sound

Imagine this – thousands of music fans waiting to listen to their favorite band. The magic begins, the band begins to play and instantly everyone knows that this is a concert experience unlike any other. The immersive hyperreal sound technology […]